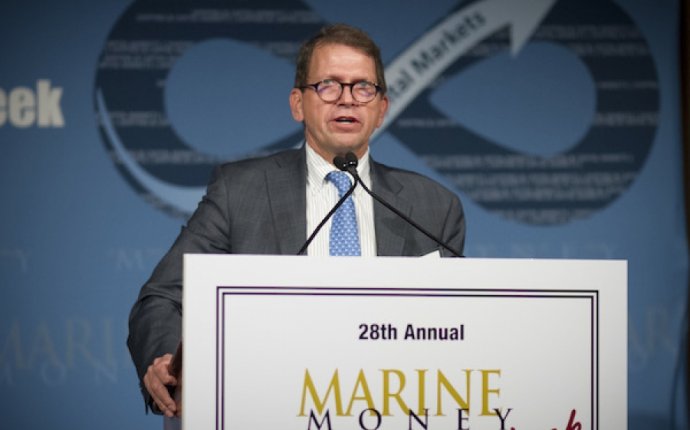 The event, held at New York’s very posh Pierre Hotel, drew upwards of 1, 300 attendees. As a veteran attendee of this event, with this iteration billed as the 28th annual conference, I can say that the overall tone was delightfully sunnier than in recent years- fueled, certainly, by the booming tanker market, which has continued to generate Wall Street activity.

Absent this time were the armies of expensively suited vulture investors and restructuring bankers, many of whom are lawyers schooled in the intricacies of bankruptcy work, who filled up the room in recent years. There appeared to be an increasing number of commercial lenders in attendance compared to the dearth in the last few years. Indeed, one speaker described Sea Bridge Financial, a new lending partnership between Credit Agricole and Sumitomo Mitsui Trust, now in the midst of deploying up to $1bn of shipping debt.

Conference chair Jeff Pribor, the global head of maritime investment banking at Jefferies, in his welcoming remarks, described the relationship between Wall Street and the shipping industry as “a house divided”, with negative views about dry bulk but many bright spots surrounding tankers. Quick to counter sentiments that dry bulk’s contagion had spread to other sectors,

Pribor offered the view that, instead: “The state of the union for Wall Street and shipping is at least not too bad, and, I would say, pretty darn good.” He then pointed to examples of public offerings and merger/ acquisition deals. He noted that the tie-up of Navig8 Crude with General Maritime, with an IPO offering now “on the road”, ie doing investor roadshows, was an example of consolidation finally happening.

Paddy Rodgers, the ceo of Euronav, another consolidator, now basking in the sunshine of a VLCC market moving from strength to strength, stressed the importance of consolidation, and presented the view that shipping companies need the capital markets as they create companies with some scale, which can then exert “pricing power” in a marketplace dominated by powerful charterers. Throughout the conference, attendees heard a variant of this theme- with several speakers asserting that capital markets investors prefer bigger companies- with more “liquidity” (where they are public) and ability to buy, or sell, bigger share positions.