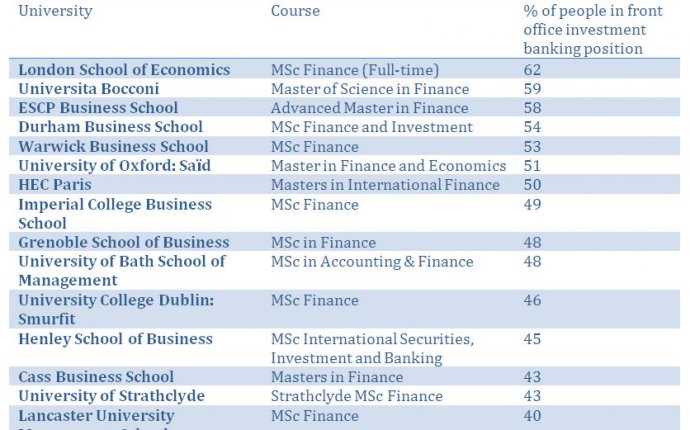 Which Masters in Finance courses will give you the best chance of securing a front office job in an investment bank? Masters in Finance qualifications are far from being de facto in front office analyst classes. Our own analysis of nearly 800 analysts who were hired in top investment banks in 2016 suggests that just 12% possessed these post-graduate degrees. They are typically most common for UK analyst classes and among analysts in sales and trading roles.

Masters in Finance courses aren’t cheap: they typically cost tens of thousands of pounds, euros, or dollars per year. If you’re studying a masters in finance with the intention of moving into banking, you therefore need to make sure it’s the right one. So, which course is most likely to land you the job?

Our analysis of the eFinancialCareers CV database suggests that the MSc Finance course at London School of Economics is now most likely to land you a top investment banking job. This is followed by the Masters in Finance course at Imperial College London. HEC Paris. London Business School and the University of St Gallen make up the remainder of the top five.

The league table is based on the proportion of people with finance-focused Masters degrees in our CV database who have gone on to secure a ‘front office’ investment banking job upon graduation. This means those who have moved into M&A, capital markets, sales and trading or equity research. Since the rankings are simply based upon individuals’ moves upon graduation, we’ve included both pre-experience courses (which make up the majority) as well as the small number that recommend students have industry experience before undertaking them.

We’ve allocated a greater weighting to those gaining a position in a tier one investment bank (Bank of America Merrill Lynch, Citi, Deutsche Bank, Goldman Sachs, J.P. Morgan and Morgan Stanley), followed by tier two banks (Barclays, Credit Suisse and UBS) and finally tier three institutions (BNP Paribas, HSBC, Nomura, Royal Bank of Scotland and SocGen) and, together with the proportion of people securing a job, have assigned a score to each college.

While it’s not easy to get a front office investment banking job anywhere, the U.S. investment banks still attract more applications and hold more prestige. Our weightings have worked in favour of those schools which feed into the U.S. firms, therefore. Some of the French schools, which have very highly-regarded MSc Finance courses, could have ranked higher were it not for the fact that so many graduates go on to work for French banks.

HEC Paris does feed into a lot of tier one banks, but Essec Business School – ranked 7th in the FT league tables – came in 16th in our rankings, largely because 48% of its graduates on our database went on to work for tier three (primarily French) banks. The University of St Gallen graduates often went on to work for Swiss banks, but enough now work for top investment banks for it to break into the the top five this year.