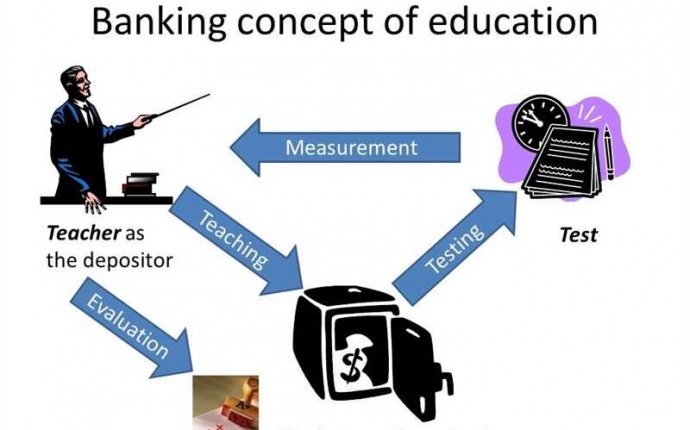 Paulo Freire was a Brazilian ideologist whose radical ideas have shaped the modern concept of and approaches to . In his essay The 'Banking' Concept of Education, Freire passionately expounds on the mechanical flaw in the current system, and offers an approach that he believes medicates the learning-teaching disorder in the classroom. The flawed conception, Freire explains, is the oppressive “depositing” of information (hence the term 'banking') by teachers into their students.

But, according to Freire, a “liberating” educational practice (his problem-posing method) negates the unconsciousness of those in classroom roles, and no false intellectual stimulation can exist within that practice. On the contrary, in any case, the student is responsible for understanding the material one way or another depending on what style the teacher adapts, even if the content is un-relatable to the students’ lives. If a teacher has a certain premeditated lesson, then there can be no true independence on behalf of the student, because both the banking and problem-posing concepts are anti-autonomous.

The “banking concept, ” as termed by Freire, is essentially an act that hinders the intellectual growth of students by turning them into, figuratively speaking, comatose “receptors” and “collectors” of information that have no real connection to their lives. Freire states:

"Implicit in the banking concept is the assumption of a dichotomy between human beings and the world: a person is merely in the world, not with the world or with others; the individual is a spectator, not re-creator. In this view the person is not a conscious being (corpo consciente); he or she is rather the possessor of a consciousness: an empty “mind” passively open to the reception of deposits of reality from the world outside" (247).

What Freire means by this is that the banking concept imposes a schism between a person (teacher and/or student) and the “real world”, resulting in the evident demise of his or her true consciousness, since the former can only be realized through the relationships and connections the individual draws from the material to their life.