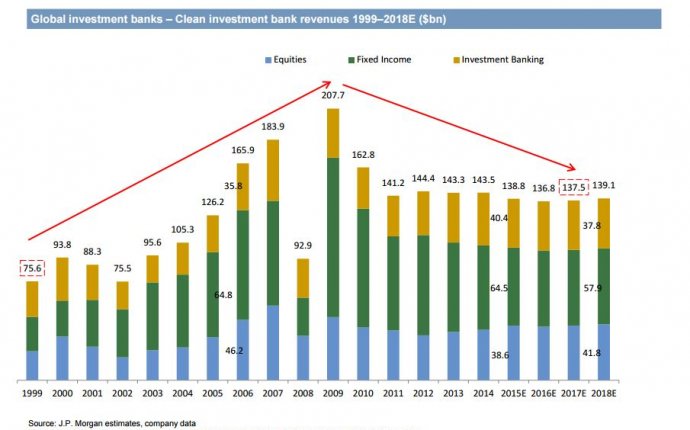 At the start, it might look like a series of structured transitions from the excel-filled days of the analyst all the way up to the client-heavy dinners of managing directors.

But life often gets in the way. And more and more firms are taking this into account as the fight for talent broadens beyond the university milk-round.

Since its trial run in 2013, JPMorgan's so-called Re-Entry Program has expanded to London and Bournemouth, offering 18-week trial posts to people who have been out of full-time work for more than two years and have interest or experience in working in financial services.

When I left, Facebook was something primarily for college students, Twitter was just emerging and Snapchat wasn’t around.

Business Insider spoke to two people on the 2016-2017 program – Marie Tran in fixed income structuring and Margaret Delesalle in European marketing at the private bank – to get a sense of what the programme is like and how it feels to return to work after a long absence.

The following interview is edited for length and clarity:

Ben Moshinsky: Why did you apply for the JPMorgan program?

Marie Tran: I used to work at JPMorgan, for four years until 2013, and I always kept in touch with my former colleagues. It was my former manager actually who told me about the program. And when I heard about it I was already thinking about returning to JP Morgan, and so it was a perfect opportunity to do that.

Margaret Delesalle: For me, when my youngest daughter went off to primary school, I became very interested in going back to work. In March 2014 I read an article in the New York Times called Helping Women Get Back in the Game, which profiled JPMorgan's first ReEntry classes. I was in Brussels at the time, where I had worked for Citigroup. When Citi moved its European HQ to London in 2007 I had the choice of moving with them or staying. As I had two young children at the time, I chose to step out. So I've been out for nine years.

BM: Was it a shock to come back to work?

MD: In some ways it's been much easier than I expected. A lot of it is the challenges you would face with any new job – not being familiar with the people and culture, and for me being in a new city. Some things have changed. In the marketing world for example, social media has evolved. When I left, Facebook was something primarily for college students, Twitter was just emerging and Snapchat wasn’t around.

During my career break I stayed connected to the industry and I worked on a website strategy for a charity but there are still some things I will need to come up to speed on. People here have been very helpful and are happy to answer any questions I have.

MT: On my side it hasn't changed that much. Of course there've been a few regulatory changes and the environment has evolved a little but nothing too significant. But I've got a different role. I used to be in the sales team, now I'm in structuring. There has been an adjustment, a learning curve being in a new job and the challenge of being up to speed again and efficient again as soon as possible.

MD: It's exciting. My daughter said to me 'If this is something you want, mum, then I really want it for you too." It is very exciting to be back.

We're all in the same situation and facing the same challenges.

BM: How did you manage the transition from home life to getting back to the office?

MD: In order for me to come back it's been an effort because it's involved moving cities. My husband found an opportunity in London at the beginning of the year, so he started in February. We had anticipated moving at the end of the school year but the challenge with London is that it's hard to get your kids into school. So when we found two places we moved immediately.

I went from living in Brussels in January to all of a sudden living in temporary accommodation in London in March. The applications for this program were due at the end of April. A friend of mine said that the biggest changes are sometimes easier than making a small change to your life.

MT: I left to work in a start-up company for two years which had always been an interest for me and I had a child last year. I went from working on the trading floor to building that project from my living room. The project was aimed at making smartphones easy to use for visually impaired people and it was a great experience at that stage in my career. It was quite easy to feel natural here when I got back, and to get used to the activity of the trading floor again. We had the opportunity to meet one of last year's members of the scheme. She talked us through her experiences and gave us some advice about work-life balance. She was really enthusiastic.

Things that at the time that might not seem to lead anywhere often come back and lead somewhere.

BM: Is there a camaraderie with the other people on the program?

MD: On my first day on the job my manager had set up a meeting with a woman from the 2015 program in New York and I have spoken with others as well. There is the sense of really forming a group. Overall the participants have been overwhelmingly positive about their experiences.

MT: We have a group feeling with the ladies in the program this year.

MD: One of the biggest challenges about coming to an organization is developing a network of people within the company and so having our own class has been really useful.

MT: We're all in the same situation and facing the same challenges.

BM: How do you continue to manage your family life now you're back at work?

For people applying, have confidence in yourself. Talk and network as much as you can.

MD: Ask me again in a month! It's a shift. I have two daughters who are 10 and 12. For my children it's meant taking on more responsibility, for my husband it's been about co-0rdinating our schedules and he's been really supportive with that.

MT: On my side it meant a lot of support from my husband as well, to coordinate. It seems to be falling into place but it does take some time to adjust from having a full day with my child to a work day. You still have a lot of quality time at home as well. I've got one nine-month-old.

MD: It is a balancing act and a learning process. When I worked before the children were very young. Now our mornings are about getting them up and ready for school. When you get home at night, the children have questions about their homework and that's another job waiting for you.

BM: What advice do you have for people looking to get on the program next year?

MD: For people applying, have confidence in yourself. Talk and network as much as you can. I had applied for a full time position at JPMorgan a year ago, and although I didn't get the job at the time, the woman who interviewed me was quite interested in me. When I started going through interviews for the ReEntry Program this year, I met with her again and she is now my manager.

MT: It's definitely worth trying.

MD: And things that at the time that might not seem to lead anywhere often come back and lead somewhere.