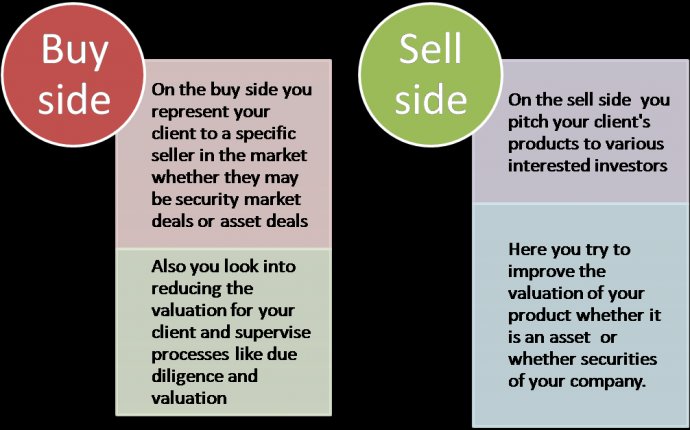 Sell side refers to the part of the financial industry that is involved in the creation, promotion and sale of stocks, bonds, foreign exchange and other financial instruments. Sell-side individuals and firms work to create and service products that are made available to the buy side of the financial industry. The sell side of Wall Street includes investment bankers who serve as intermediaries between issuers of securities and the investing public, and the market makers who provide liquidity in the market.

BREAKING DOWN 'Sell Side'

The sell side and buy side of Wall Street are dependent upon each other - one could not operate without the other. The sell side tries to get the highest price possible for each financial instrument while providing insight and analysis. Any individual or firm that purchases stock with the objective of selling it later at a profit is from the buy side. The buy side players include money managers at hedge funds, institutional firms, mutual funds and pension funds. Despite the fact the individual investors are technically on the buy side, the term is usually reserved for professional money managers.

The market makers are the driving force on the sell side of the financial market.

The FX market is the world's largest, with more than $5 trillion changing hands daily, as of 2016. The sell side is dominated by the top multinational banks, led by JP Morgan Chase, Citibank, Deutsche Bank and UBS. Bank trading rooms are divided into two groups: interbank traders, who buy and sell large amounts of currency on the spot and forward markets; and sales people, who deal with buy side customers. Those include hedge funds, mutual funds and large corporations. Many interbank traders take proprietary positions, but salespeople generally do not.

The global bond market is the world's second largest, with an estimated $100 trillion outstanding. Investment banks dominate the sell side, with the largest being Goldman Sachs and Morgan Stanley. JP Morgan Chase and Bank of America Merrill Lynch combine commercial and investment banks under a single holding company. These banks underwrite and manage bond issues, and many are also primary dealers of U.S. Treasury bonds, which means that they buy directly from the U.S. Treasury. The investment banks are very active, both trading and taking positions in the bond market.