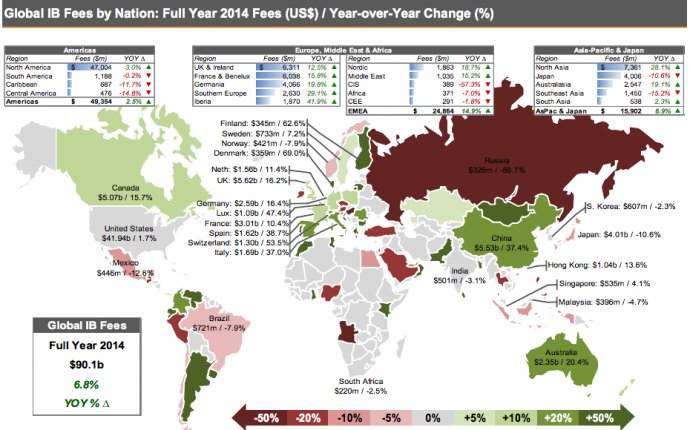 In the world of investment banks, there are ratings just like for sports teams and universities. Only, instead of being judged on batting averages or mean SAT scores, banks are ranked by the number of deals they facilitate and the value and revenue of those deals. These result in what are called league table rankings—closely followed public rankings of the banks. Each sector has banks that rise to the top. The healthcare sector is no different. In this article, we’ll discuss the top investment banks in the healthcare sector including the the large banks that dominate and the smaller banks that are gaining a greater foothold.

JPMorgan Chase & Co. (JPM), Bank of America Corp. (BAC), Goldman Sachs Group Inc. (GS) and Morgan Stanley (MS) are the four banks that have won the highest share of fees and deals for the last two years—2013, 2014, and the first quarter of 2015—according to Thomson Reuters. The fifth place was taken by Barclays (BCS) in 2013. However, beginning in 2014 and continuing through the first quarter of 2015, Deutsche Bank (DB) replaced Barclays for number five.

These same large global banks seem to consistently land the top seats in healthcare. And it appears 2015 will be no different. So far this year, the large healthcare deals of Actavis PLC ( ACT) acquiring Allergan PLC (AGN) and the Medtronic PLC (MDT) bond sale were advised by JP Morgan, Goldman Sachs, Credit Suisse, Deutsche Bank and Bank of America Merrill Lynch. It may appear that these firms have a strong hold on the top, participating in most high-profile deals that land them on the financial news pages. However, you’ll notice that many banks can be involved in the same deals. Even though a deal is high profile, it may not result in the highest revenues for the banks. And fierce competition is always nipping at their heels.

Smaller Banks on the Move

Smaller firms, who focus on niche market sectors, are also asserting themselves as key players in healthcare investment banking. One that has for many years been on the top is global investment bank Jefferies. Jefferies faced a setback in 2015 when it lost a top member of its healthcare team in a very public and messy divorce. The proceedings cast all of Jefferies in a negative light amid allegations of widespread drug use and other unsrupulous behavior in private and with clients. Nevertheless, Jefferies has built a strong past reputations over years of work. If it can bounce back from the scandal is the wild card in the sector. The jury is still out.

The top five large, global banks participate on approximately 40% of the total healthcare investment banking deals each year. The remaining 60% is being sought after by many other players, with smaller investment banking firms such as Jefferies, Guggenheim Partners and Greenhill &Co. winning a growing share of wallet. With these smaller competitors gaining momentum and disrupting the status quo, the larger players will be forced to take notice.