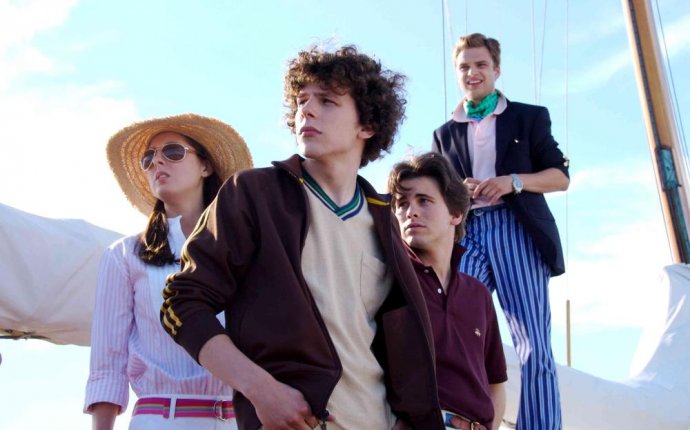 One night at a party, Charlie Banks (Jesse Eisenberg), son of a Manhattan bookstore owner, watches neighborhood tough Mick Leary (Jason Ritter) administer a brutal beat-down. He secretly snitches, then recants, and eventually heads off to college upstate, along with childhood chum and inveterate slummer Danny (Christopher Marquette). When Mick suddenly turns up—and lingers, and thumbs through The Great Gatsby, and beds the girl Charlie has a crush on—our hero’s education in class consciousness and conflicted loyalties begins.

Putting a crimp in Charlie’s lifestyle in the never-never-land of liberal arts, the blue-collar interloper is quickly accepted by his betrayer’s crew of wealthy friends. Though painted with broad strokes and marred by dialogue howlers during key moments, Education tracks Charlie’s emerging sense of identity and perspective under the pressure of Mick’s presence. His initial reaction—righteous resentment more than fear—is a well-observed detail, as is Mick’s flagging spirit.

Eisenberg again rocks the premature-nebbish hunch and birdlike attentiveness of his Squid and the Whale Brooklynite, now supplemented with an undergraduate swagger. The film is set somewhere in the Seventies and Eighties, tapping an earlier age of class collision but remaining vague. Finally, yes, this struggling indie filmmaker is Fred Durst of headslappingly multiplatinum Limp Bizkit; Education was actually his feature debut, made prior to the brain-dead summer ’08 release, The Long Shots, about a striving quarterback.