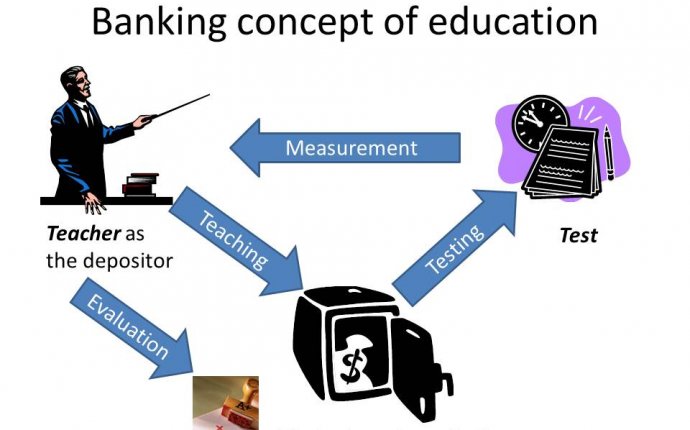 In "The banking conception of education" Freire is responding to the fact that seldom is knowledge presented in school in a way that it solves or works to solve problems, which the student actually has.

When I get on-line to seek out information about what's happening in Kosovo, I have a puzzle, a concern, a need. I use my skills in research and reading and thinking, and the data offered so that I can find what I need. Knowledge is of use, and I learn in this pursuit of knowledge.

A standard defense of the banking conception of education is to argue that I can do this only because I have had my basic skills formed. I was taught to read, write and think, I was given basic research skills, I learned some geography and a bit about world history and so forth, all of which put me in place to now use my knowledge to inform myself on Kosovo.

Part of Freire's response is, of course, that the pedagogy of the oppressed is for adults who want and need to transform their world. It is, by definition and aim, a pedagogy of use and practicality. But, of course, it is more. It is a way of life in order that we can become more fully human as Freire understands it. One could try to broker the gap between Freire and the banking concept by suggesting that the earlier years of school be "training" in basic skills in order to enable a liberating pedagogy later on. But I think most of us can see that there are dangers in this. It doesn't seem to happen in our schools with any seriousness of purpose. Even in the university, where most students are fast approaching the end of formal education, the banking conception and the teacher/student relationship described by Freire in the banking mode, dominates.

I have had the exciting privilege to participate in Freirian-style learning in Haiti. In the consciousness raising and training in critical consciousness groups one saw the students operating much as Freire describes as liberating pedagogy. However, in the very same villages, and almost always as a part of the same programs, there was literacy training since most of the people could not read or write. Those literacy classes looked very much like banking education as I understand it. The teacher taught and students learned. Drill, memorization, repetition all were dominant tools.

But Freire goes beyond just the classroom messages. He is also arguing that the mode of relations between teacher and student are important in shaping relationships for how to be toward each other as humans. The banking model of education, and I would even include our liberalized version of it at Webster University, still fosters and makes virtually absolute, an US AND THEM relationship where one group is faculty with the power over the curriculum and grading, credits and degrees, and the supplicant students doing what they are told to get those rewards of certification.